UVESA AWARDED FOR ITS HELP TO PROMOTE SPORT in Tudela (Navarra)

January 3, 2018- Grupo UVESA closed the year by receiving a prize from the City Council of Tudela, which acknowledges its support to the promotion of sports in the riverside capital. The award, collected by the Commercial Director of the Avicola Area, Jesús López, was delivered during the course of an act chaired by the mayor, Eneko Larrarte, on December 29. 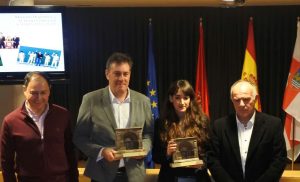 The awards, of biannual character, are intended to recognize and highlight the values of those people and entities that “with their effort, perseverance, work and successes have distinguished themselves eminently in the promotion and promotion of sport in the city of Tudela a over the last two sports seasons “.

Throughout these years the UVESA Group has sponsored the Futsal School of Ribera Navarra that this season is playing with the name of Uvesa Ribera Navarra; the tip basket club Cabanillas Jai Alai or the visits of the Uvesa-Ribera Futsal Tour.

Among the winners, in addition to Uvesa and Aceites Urzante in the category of companies, highlighted the cyclist and bronze medal in the track cycling world, David Orgambide as the best male athlete; the pelotari Arrate Bergara, best female athlete and as best athlete with disabilities, Sergio Pozos.[:fr]

You can find out more about which cookies we are using or switch them off in settings.

This website uses cookies so that we can provide you with the best user experience possible. Cookie information is stored in your browser and performs functions such as recognising you when you return to our website and helping our team to understand which sections of the website you find most interesting and useful.

Strictly Necessary Cookie should be enabled at all times so that we can save your preferences for cookie settings.

If you disable this cookie, we will not be able to save your preferences. This means that every time you visit this website you will need to enable or disable cookies again.

This website uses Google Analytics to collect anonymous information such as the number of visitors to the site, and the most popular pages.

Please enable Strictly Necessary Cookies first so that we can save your preferences!